Iguider and El Bakkali are the Moroccan Stars of 2018 Edition 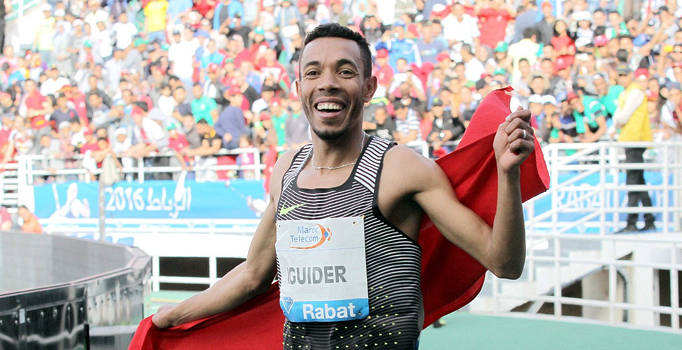 The 11th edition of Meeting international Mohammed VI d'Athlétisme de Rabat will present to the public ,on July 13th , a show of high performance with the presence of icons of the national athletics, Abdelaati Iguider and Soufiane El Bakkali.

On the 3,000m steeplechase, El Bakkali is the rising star of the distance who continues to progress. Being the Revelation of Rio Olympics Games in 2016, where he finished fourth in 8'14 "35 , last summer, the young 21-year-old has continued to improve his personal reference ever since. He thus clocked a time of 8'05 "17 at Roma meeting in June 2017 where he was only beaten by the Kenyan Olympic champion Conceslus Kipruto.

At the last Edition , El Bakkali had established himself by performing  8'05 "12. First of his event in the Diamond League rankings he finished second in the final of the 3.000m steeplechase last August.

The highlight of Soufiane El Bekkali‘s season was the first silver medal he offered to Morocco during the 2017 IAAF World Championships. At 21years old , the Kenyan rival Kipruto (8: 14.12) clocked a time of 8 : 14.49.

Morocco is grateful to this great athlete who gave him his first silver medal at IAAF World Championships since Hasna Benhassi's on 800 meters in 2007.

The other star of Rabat 2018 meeting, will be Abdelaati Iguider winner of the 3,000 m in 2017 Edition . World Junior Champion in 2004, then indoors in 2012, bronze medalist at the London Olympics the same year, the native of Errachidia is the only athlete to have brought back a medal from  IAAF World Championship Beijing 2015.

Bronze medalist last March at the indoor world championships in the 1500m, Iguider (3: 58.43) will try to shine during the meeting of the capital, and of the first Diamond League event taking place in Africa.