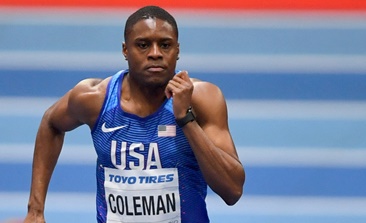 One of the biggest names of the eleventh edition of the Meeting International Mohammed VI de Rabat , scheduled for July 13 at Complex Sportif Prince Moulay Abdellah , will be the American, Christian Coleman, world record holder in the 60m last February (6 ''34) and crowned World Indoor Champion in Brimingham 2018 ( 6''37)

An opportunity may be for him not only to break the record of Rabat Meeting  (9 "98) but also to sign the world best performance of the year. His personal record on the 100 m says a lot about this young athlete (22 years ) with a time of 9 "82, realized last year.

The men's 100m event  will be masterful with also big sprinters  names such as the South African, Akani Simbine (9 "89), Roonnie Baker, (9" 90) and winner of Eugene and Rome Diamond League meetings) , the American Michael Rodgers (9 "89) and the British Reece Prescod (10" 03) winner of Shanghai Diamond League in Shanghai, all accompanied by the recent winner of the championships US 2018, junior world champion and current holder of the world best  performance of the year ( 9'88), Noah Lyles, not yet 21 years of age. It is actually an explosive 100m that the public will witness under the sun of the Kingdom of Morocco, Rabat.

With Christian Coleman and other stars in the other events of the program, a mondialito in Athletics has been guaranteed in Rabat on July 13th .